#NotOK, A Movement to Empower Teen Girls to Stand up to Inappropriate Requests from Teen Boys! 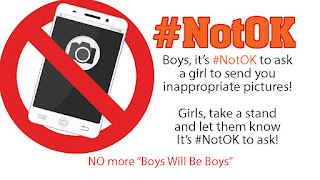 Parents, do you know what your sons and daughters are up to on their phones?  If we’re being truly honest with ourselves, I think most of us would have to admit we do not.

Here’s why I ask.  Recently my daughter’s friend mentioned the common practice of middle-school and high-school boys asking girls to show their “stuff” via SnapChat.  Why SnapChat?  Supposedly, all photos immediately disappear after viewing, so it’s presumed there’s no way such pictures can ever be shared and become viral (however, there are exceptions to this... because it’s actually possible for someone to take a screenshot).  Regardless, it would appear these requests are so common that teenage girls have come to tolerate them as annoyances that are best avoided, but that will presumably never go away.  Chalk it up to that old mantra “Boys will be boys”.  When I asked my daughter and her friend how often this happens they told me it happens all the time.  When I asked them what they do about it, they both said, “We just say no".  Which leads me to the sad realization that girls don’t quite understand that they can, and should, be enraged by these requests.

When I told my daughter I thought she should respond with outrage and unfriend these boys, she explained that she wouldn’t have many friends left.  My immediate reaction, of course, was good riddance.  But we’re talking about young girls here; kids who are just doing their best to navigate the often confusing paths of friendships in an adolescent world where social media is the end all.  But when girls just turn a blind eye to such requests, they are inadvertently condoning this behavior.

Social media, as we know it today, did not even exist a few short years ago.  We as parents are in unchartered territory.  But more importantly, so are our impressionable children.  As parents, it’s our job to prepare our children for the situations they are facing now, and for those they will face moving forward as they merge into their adult lives.

First and foremost, I believe the message of respect is being neglected.  Shame on me . . . and shame on you.  All parents, mothers and fathers, should be having some very real conversations with our kids about respect.  The more we collectively accept the mantra “Boys will be boys” the more we condone this sort of behavior.  Boys should be taught to respect girls enough to know that asking a girl to “show her stuff” is wrong on so many levels.  And girls should be taught to respect themselves enough to be outraged by such requests.

This situation brings to mind the onslaught of recent headlines in which women are finally coming forward with #MeToo, the hashtag which has recently gone viral.  When I contemplate why #MeToo took off so quickly I realize there’s strength in numbers.  --But taking that one step further, there’s power in the hashtag.  Sadly though, the #MeToo movement came far too late to protect anyone when it was most needed.  How much better would the #MeToo movement have been had it proactively eradicate the atrocities before they ever occurred?

I would like to propose a new hashtag, one that will help boys realize it’s Not OK to ask inappropriate things of girls simply because they think nobody is watching.  It’s my hope that #NotOK will provide girls with a message of empowerment that teaches them to respect themselves enough to say it’s Not OK for boys to ask.  I hope this post goes viral.  I hope every parent takes this to heart.  And I hope that every parent of a young man or woman has a talk with their kids about respecting themselves and others.

Above all, my goal is to arm my daughter and every other young person out there with the tools to fight back with a resounding message that it’s #NotOK.  -- #Not OK to ask girls to share inappropriate pictures,  #NotOK to blatantly disrespect others, and #NotOK for kids to display a total disregard for those in their contact list simply because they mistakenly believe they can hide behind the anonymity of social media!

Dianna Young is the author of Muted Grey, the multi-award winning novella, and a national public speaker.  To learn more about Dianna Young, or to contact her, visit her website.